Year 7 have been producing some superb work in their Drama lessons.  Their latest task has been to make a Shoebox Theatre, featuring scenes from some of Shakespeare's finest plays.

Below, Elisha Pang explains the scene she chose to replicate from A Midsummer Night's Dream:

'My theatre box is about a couple in love who were trying to run away!  Hermia is in love with a man called Lysander but is betrothed to someone else! Hermia hasn’t told anyone except her devoted best friend. My scene shows the loving couple in a forest. Not just any forest - it is the most peculiar forest ever to exist. What's so special about this forest was that fabled creatures like fairies live there, and tonight is going to be a hectic night.
Somewhere out in the woods is a very resentful person who hates Hermia and Lysander being together. He is called Demetrius, the man who Hermia’s father told her to marry. He loathes Lysander for stealing his betrothed'. 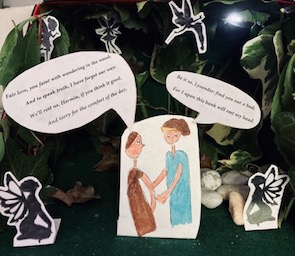 Amara Ahuja - Romeo and Juliet
''Firstly, I painted the outside of the box in a terracotta colour. I thought the colour may cause the shoebox to begin to look a little bit the Italian architecture of the time. For the inside of the box I painted the ground a sandy road colour and the sky a light blue colour. 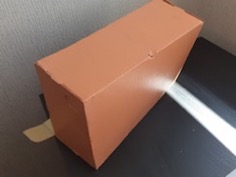 Secondly, I began to create the characters needed for the scene; Romeo and Juliet, out of magic clay and a bit of fabric. For Romeo I created him using yellow magic clay and some brown paint for his leggings and for Juliet I used magic clay to make her dress and body. I used a bit of fabric to add a pattern and a bit more colour to her dress, and I used a pencil to make both of their faces and a brown marker for their hair. 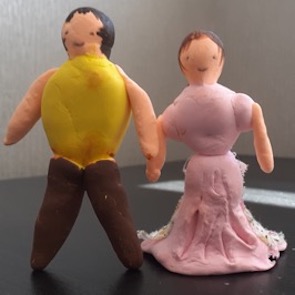 Thirdly, I created the buildings and architecture for the scene using cardboard and paint. I started with the balcony and made sure the space was large enough for Juliet to stand on. I also created a cardboard door that opened. I tried to use sandy, washed out colours when creating the buildings to try and make it look like it was in Italy because the play was originally set in Verona, Italy. I also decided to create a cardboard archway because in most of the examples we looked at, the settings included these. It really added to the Italian theme! 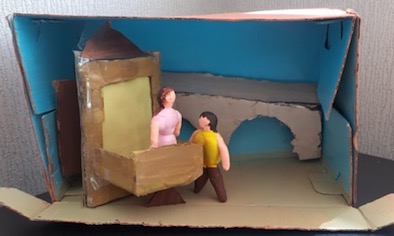 Overall, I enjoyed this project because it was really fun and I liked created the people and constructing the architecture and building!''