Every Friday lunchtime since the start of term, a group of Year 10 girls have gathered in the Sixth Form ICT suite to watch a Spanish comedy film. This film gave us all a good laugh at the end of the week, and provided us with much chatter and excitement, along with a better understanding of the Spanish language as the weeks progressed. The film we watched was called “Di que Sí” (Say I do), which was a romcom about two people who met on a dating show accidentally. They then have to get married in order to win a large sum of money from the dating show; however much peril awaits them in the form of a…terminator wannabe!

This action-packed, hilariously entertaining film came to its conclusion last week, which was when we chose the next film called “Das Leben der Anderen” (The lives of others), an Oscar-winning German political thriller which will surely provide a change of tone from the previous film. 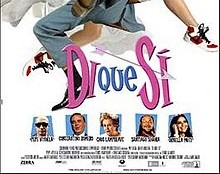